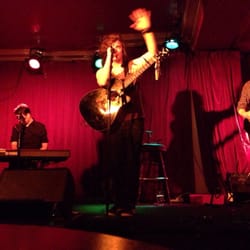 Whelan’s of Wexford Street is in the unique position of being not only one of the most important live music venues of the last decade, but also one of Ireland’s most famous pubs, favoured for its warm, convivial atmosphere.

Whelan’s live venue and bar is located on the bustling Wexford Street strip in Dublin’s city centre. The earliest definite record of a public house on this site dates from 1772 when Christopher Brady operated a licensed premises on what was then still popularly known as Kevin’s Port. The premises changed hands many times throughout history.

In 1989 Gary Whelan and Ian Keith made inroads into making Whelan’s the music venue it is today. While renovating, they stripped synthetic tiles, plasters and worktops that were added in the middle of the century in an act of modernisation, and uncovered the original wooden and stone surfaces. The cost of renovation led to large bank loans, which in turn led to large interest repayments.