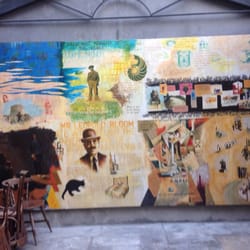 Housed in a stunning 17th Century Georgian building, the James Joyce Centre is dedicated to promoting understanding of the life and works of James Joyce. Set over three floors, the Centre covers Joyce’s life and work with a permanent interactive exhibition on Ulysses.

There are also free audio tours of the building, Joycean walking tours around Dublin city, regular lectures, events and educational courses. The James Joyce Centre is also the coordinating body for the Bloomsday Festival, which will take place from June 11th – 16th in 2015.

35 North Great George’s Street was built in 1784 for Valentine Brown, the Earl of Kenmare, who used it as his townhouse. The plasterwork here was done by Michael Stapleton, one of the finest stuccodores of the time.

In the eighteenth century this area of Dublin was very fashionable but it fell into decline in the nineteenth and early twentieth centuries. By 1982 twelve houses on North Great George’s Street had been demolished by the City Council including the house next door.

Though Joyce never lived in this house, he has a connection with it through Prof. Denis J. Maginni who ran a Dance Academy here. Maginni was a well-known and colourful character in Dublin and appears several times in James Joyce’s Ulysses.

Number 35 was saved from demolition by Senator David Norris, a Joycean scholar who also lives on the street. With the help of many others and with funding from a variety of sources the building was renovated and the Centre opened in June 1996.