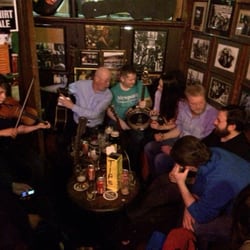 O’Donoghue’s Pub is a historically significant drinking establishment located near St. Stephen’s Green on Dublin’s south side. Built in 1789 as a grocery store, in 1934 it began operating full-time as a pub when purchased by the O’Donoghue family.

The Pub is closely associated with Irish Traditional Music and was where the popular Irish folk group, The Dubliners, began performing in the early 60’s. Many other notable Irish musicians (including Christy Moore, The Fureys, Seamus Ennis, Joe Heaney and Phil Lynott) have played at O’Donoghue’s and their photographs are displayed in the pub. Included are portraits of The Dubliners (Ronnie Drew, Luke Kelly, Ciaran Bourke, John Sheahan and Barney McKenna as well as later members Eamonn Campbell and Sean Cannon) that hang to the right of the entrance where the nightly sessions are played.

Dessie Hynes from Longford bought the bar from Paddy and Maureen O’Donoghue in 1977 and ran the pub with his family for the next 11 years.