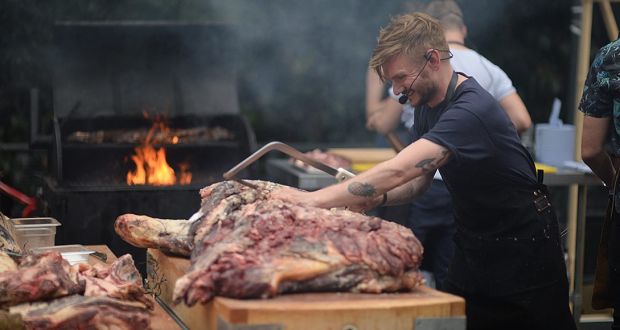 Meatopia Food Festival, a festival for “carnivores with a conscience”, made it’s way to Dublin, after becoming a hit in New York and London. On the first two days of July, you can go to this even at the Open Gate Brewery, and with main sponsor being Guinness.

Alongside the Guinness, you can find local brewed beers from independent brewers in Ireland and UK. And of course, with some good music, so the food can go smoothly.

Meatopia Food Festival will include chefs, butchers, artisan producers and brewers, who will grill and smoke meat that was ethically sources over charcoal and wood. They will also participate in talks and discussion and give demonstrations on topics as butchery or fire management on a barbeque.

The main theme of this festival is sustainability and responsability, as Meatopia manifesto states: “Every piece of meat on offer will have been raised naturally, lived the best of lives and be totally and utterly hormone, antibiotic and cruelty free. Our animals will all be native and rare breeds. Bred, raised and butchered locally to where they lived, and sourced from as nearby as possible”.

The line-up for the Dublin event is not yet finished, but you can expect some big names as Richard Turner, the main chef at Hawksmoor, Dan Doherty from Duck & Waffle, Tomos Parry from Kitty Fisher’s. The main guest however will be Francis Mallmann.

Tickets for Guinness X Meatopia will go on sale on June the 2nd – check this link for more details.